Most people know that going meatless occassionally (or regularly!) is good for you and the planet. When you switch out meat for plant-based protein sources like beans, you're getting more fiber and less fat. When you take meat out of the equation, it allows for veggies to take center stage, upping your intake of vitamins and protective antioxidants. It also requires substantially less precious resources such as water and fossil fuel to produces veggies than it does meat. Ironically, veggies, which can be grown in actual greenhouses, don't produce nearly the amount of "greenhouse gases" that meat production creates.

Meatless Monday can also be good for your budget! A can of beans costs significantly less than the same volume of meat and contains sufficient protein to balance your meal.

One of my favorite Meatless Monday options is a veggie-filled minestrone soup. I know there are probably Italian chefs out there that will argue that minestrone is a specific recipe that likely doesn't include kale, but my version of minestrone includes whatever veggies I have on hand or feel like picking up to toss in the soup. Basically, vegetable broth + tomatoes + Italian spices + veggies + beans + pasta (optional) = minestrone soup. Serve with grilled cheese wedges if desired. (Or in my case, grilled "cheese." I don't do dairy, so I use a cheese substitute.)

I usually just use a can of diced tomatoes* with Italian spices, but I happened to have a fresh tomato in the fridge that needed to be used up so in the soup it went! *I use organic diced tomatoes because the particular brand I buy doesn't use BPA to line the cans. BPA is a chemical that's being looked at closely for potential negative health effects, and until there is conclusive evidence to prove its safety, I steer clear as much as possible.

Here's the super complicated recipe: Dice up all the veggies. Drain and rinse the beans. Cook the pasta. Throw everything in a pot. Salt, pepper, oregano to taste. Let it simmer until the hard veggies like carrots are soft. Eat and enjoy.

Have food, will travel.

The Intimacy of Eating 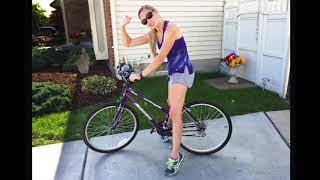 Don't put an expiration date on your health.

When "Listen to Your Gut" Means So Much More